What The Hell Happened to Courtesy 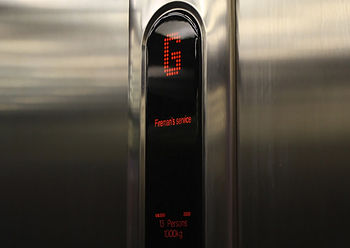 English: A KONE Ecodisc elevator in Glasgow after a fire alarm has been activated, causing the lift to enter Fireman’s Mode. (Photo credit: Wikipedia)

I have written many times about the lack of elevator etiquette. There are the people who try to take a cigarette into the car, those that dump buckets of perfume/cologne over their heads and then enter the car and there are those that think that it is ok to hold the door while they finish their conversation with someone who has chosen not to get on the elevator. How is that for a run-on sentence.

But today I encountered a new jerk. Today I rode the elevator with a man who thought that it was ok to share his flatulence with me. It is one thing to share these in silence. Iâ€™ll do my best not to cough and turn blue while holding my breath.

It is quite another thing to just let one ripâ€ as if you havenâ€™t a care in the world and it is even worse when you donâ€™t apologize or excuse yourself. That is what happened today.

The man didnâ€™t yell â€œforeâ€ or â€œGeronimoâ€ or give any indication that he was about to soil his pants and I am fairly certain that this was â€œwet.â€ I apologize for the detail, but I am still horrified by this and as a father who has changed many a diaper I know the signs.

It was loud. It was wet and was most aromatic in a most unpleasant way. I wanted to run. I wanted to flee but there was no place to go. The doors were closed and we were between floors.

As I gasped for breath I thought about my family and a sob escaped my throat. There was something so unfair and so unjust about this. My children were going to have to be told that their father died trying to rescue children from a burning building not that he died as a result of asphyxiation caused by noxious fumes from a common â€œfart.â€

The thought was so upsetting. In my mindâ€™s eye I could see them being teased on the playground. I could hear the vice-principal suspending my son for fighting and saw his mother explaining that he didnâ€™t need to fight every time some kid tormented him about it.

Suddenly the elevator doors opened and I flung myself into the hallway. Gasping for air I rolled on the floor and inhaled the stale but ever so sweet after effects of the cleaning crew. The scent of their passage lingered in the air and I reveled in the gift of life I had received.

In the interim stinky rolled on out of the office and waddled down the hall. I carefully followed him and watched him enter an office. Later today we will show him how we deal with terrorism in this part of town.

The boys and I are going out for burritos and chili. Together we will enter his office and then drag him to a utility closet where we will unleash our own WMDs, mercilessly. And as all good terrorists do Iâ€™ll videotape this so that I can create more terror by uploading the file onto the net.

Flatulent Fred, judgment day is coming for you.

Linked up with Dude Write.

What The Hell Happened to Courtesy

Great Names For a Blog

Does Blogging Make You Feel Obligated?