A drowning man jumped on my head today or maybe it was a woman- I am not really sure. I just know that someone tried to save themselves by trying to suck me into their private darkness.

I didn’t appreciate it much. In fact I found it less than neighborly and downright irritating. I have my own darkness to contend with and there are already ten people standing on my shoulders.

There is a reason why I was given a massive set of shoulders and hands that look like meat paws. It is because I know how to keep going when the going gets tough. I never stop moving forward because once you lose that forward motion it is a bitch to start moving again.

But as I tell my children sometimes the unstoppable object meets the immovable and something has to give.

Those four words above are both subhead and hyperlink. They’ll take you back to a post where I tried to use Wordle images to help tell some tells. There are several there but the one that grabs my attention now is this one. 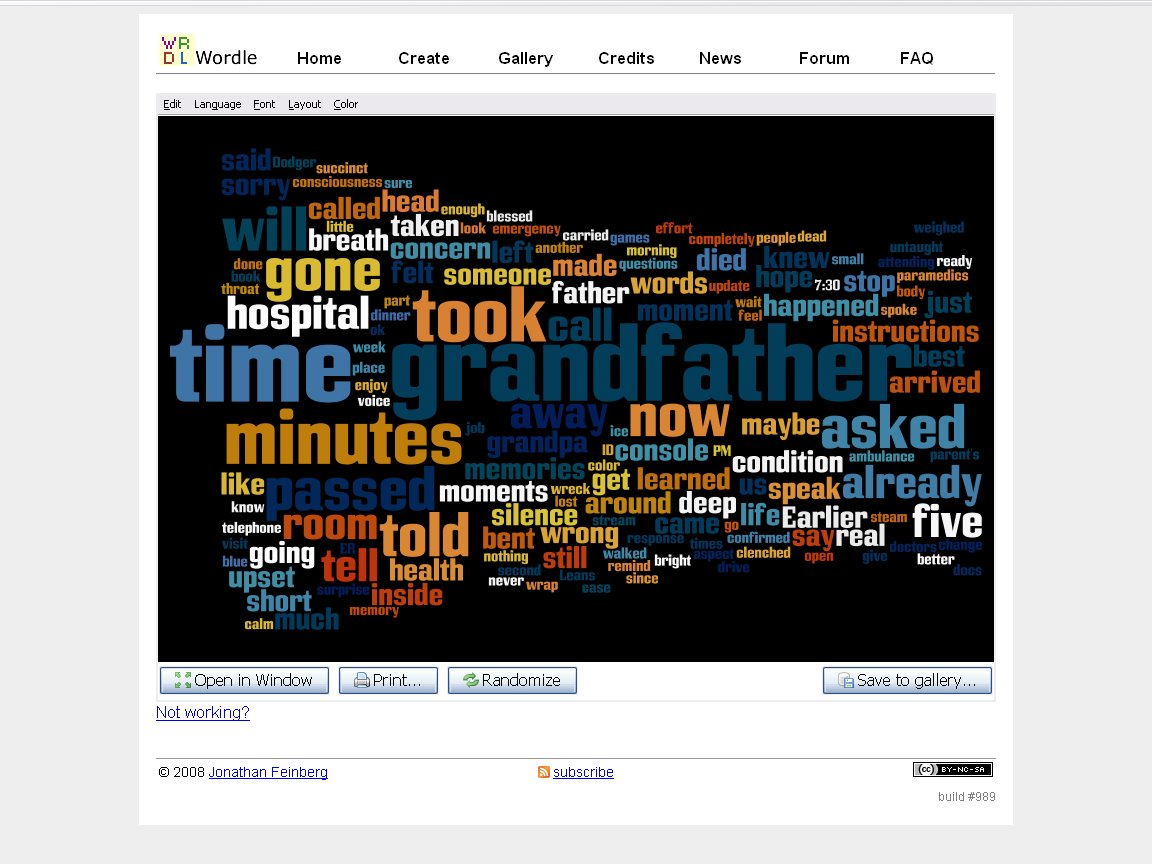 The Bearer of Bad Tidings- One Less Set of Footsteps

It is from a post called The Bearer of Bad Tidings- One Less Set of Footsteps and it is about the death of my paternal grandfather. But really there is so much more tied up in it, far more than I can impart in these few words here.

It is a horrible experience telling a parent that they have lost a child and obviously the memory has stuck with me. What can I say other than these are/were some of the most important me in my life. I don’t ever recommend making your grandfather cry.

The Important Things In Life

Grandpa died on June 24, 2006 and I can say that it was the beginning of massive changes in my life that I still feel to this day. There are lots of reasons why this is so and plenty of evidence to suggest that many of those changes are positive, but not all.

But I like to think that I have gotten better about acknowledging that I am not alone here and that there are many others on this journey with me.

Maybe that is because it took time for me to realize how heavily my parents had begun to lean upon me. That is not a bad thing nor a complaint, but an acknowledgement of my recognition that they weren’t the same superheroes of my youth.

Yet in many ways they still are and that is the contradiction of being a grownup with aging parents. One day my own children will be old enough to really see me. One day they’ll see that I have always been this flawed individual who did his best but didn’t always get it done.

And if they don’t then the words I share here will probably shine some light on that, or maybe not. Maybe they’ll see this as nothing more than one daddy bloggers words.

Cruising through the blog I have stumbled onto some old posts that make me cringe and others that make me laugh. My kids may kill me but things like She Broke My PenisÂ andÂ My Penis is SadÂ are classic. Serendipity makes me smile too.

Some Days I Feel BrokenÂ and Â The Cries Of the Broken HeartedÂ take me other places and remind me of so many things. And these words, they resonate with me in ways that I can’t explain

So I am closing down the shop for a bit and hoping that you understand. The dreams of the past can meet the echoes of the future but only if I deal with the reality of today.

Give Me One Moment In Time

Parenting & The Challenges of A Home Office

The Private School Versus Public Dilemma