Abligurition– n.[L. abligurito, fr. abligurire to spend in luxurious indulgence; ab + ligurire to be lickerish, dainty, fr. lingere to lick.]
Prodigal expense for food. [Obs.] Bailey.
Anililagnia– an attraction to older women.
Armsaye: the armhole in clothing.
Euneirophrenia: peace of mind after a pleasant dream.
Suppedaneum: foot support for crucifix victims.
Adfenestration: V. The act of entering through a window, usually surreptitiously.
Vatic–adj.Of or characteristic of a prophet; oracular.

Juggling Frogs is to blame for turning me onto Wordle. I am having way too fun with it. The image below is my blog. Click on the image to make it larger. 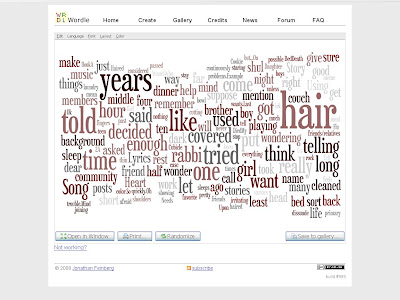 It is vocabulary time again. Here is part one, part two, part three, part four, part five, part 6 and part seven. As always we’ll try not to repeat ourselves.

Also, I noticed that I made a mistake last time and didn’t list the definition of the words alongside them. I’ll rectify that lower down in the post. Here are your new words:

Otiant– idle; resting.
machicolation– n. apertures in parapet or floor of gallery for firing upon persons below. machicolate, v.t. furnish with these
Secern– To discern as separate; discriminate.
prothalamion -A song in celebration of a wedding; an epithalamium.
a capite ad calcem–From head to heel.
ad internecionem– To extermination.
Abusus non tollit usum-Wrong use does not preclude proper use.
ad captandum vulgus-To attract or to please the rabble.

It is vocabulary time again. Here is part one, part two, part three, part four, part five and part 6. It is probably time to provide a list of the words that have graced your computer screen. You’ll be able to find it beneath the current words.

Here are your new words:

And here is a list of the past vocabulary words we used.

I found this article in the Guardian and thought that it was kind of interesting.

“It involves learning Swedish and a lot of Scandinavian place names, unfortunately, but that accomplished you will never again be fooled into thinking that Julfrid could ever be a dining table rather than a straw goat. For Ikea product names follow a system: because the company’s founder, Ingvar Kamprad, is dyslexic, he found that naming products with proper names and words made them easier to identify.

Kitchens are generally grammatical terms, and kitchen utensils are spices, herbs, fish, fruits, berries, or functional words such as Skarpt (it means sharp, and it’s a knife). Chairs and desks are Swedish men’s names (Roger, Joel); materials and curtains are women’s names. Children’s items are mammals, birds and adjectives.”