The Broad Shoulders of Fatherhood 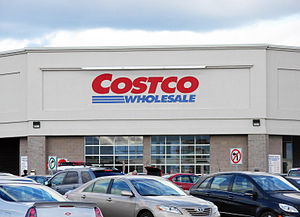 Yet the joy of parenting and responsibilities means that sometimes you have to do things that you don’t want to do. Supplies are low and these kids have this funny habit called eating.Â  And so against my better judgment we head over there minus my Taser and Pepper Spray. Armed only with my best steely glare and a bad attitude we grab a cart and walk into the warehouse. The kids are too big to sit in the cart so they walk next to it…sort of. They have enough confidence to wander a little bit and if careful attention isn’t paid they will disappear down aisles and around corners.

My eyes are forever scanning the crowds- trouble cannot hide from the ever watchful eye of dad. My daughter is happy and living in childhood oblivion. She skips down the aisle unaware that a behemoth pushing a cart filled with assorted knick knacks can’t see her. I shout her name but know that she’ll never hear me in time. Shouting no I race over there and manage to place my body in between the cart and her. A loud oomph escapes my lips followed by a startled yelp from the behemoth. He shouts at me:

“WTF is wrong with you?” I draw myself up to my full height, puff out my chest and glare at him. More colorful words are issued from a head that is a good eight inches above mine. He is clearly unhappy, but he doesn’t know that I wear the broad shoulders of fatherhood.

“Yo Gigantor. You almost ran over my daughter and that can’t, won’t happen. Not on my watch.” I take a breath and tell him to move along. But Gigantor, isn’t ready to let go. He stands in front of me, blocks my way and shouts at me. Clearly he isn’t familiar with the broad shoulders of fatherhood. My children’s safety and welfare don’t just make me fearless- they make me deadly.

“I am sorry that you hurt your little toe. But I have to tell you that I am surprised that you didn’t buy the pad with wings.” He is so much taller than I am it takes a while for the words to reach his ears and a few minutes longer to realize that I just insulted him. That probably wasn’t the smartest thing to do. Moments later Gigantor has wrapped me up in a giant bear hug. He squeezes with all his might and attempts to crush my ribs. It hurts but I am not afraid nor cognizant of the pain. All I know is that I wear the broad shoulders of fatherhood and I will not fail my children.

Fortunately Gigantor is so big that when he grabbed me I ended up next to a pallet of mayonnaise. I manage to free an arm and reach for a jar. Since it is Costco it is not the market sized container, but the 7 gallon industrial size. With my right arm I grab one and smash it against his head where it shatters upon impact. Gigantor roars in pain and drops me. A smarter man than I might have taken the kids and run, but I am not that guy. On the shelf at my feet is theÂ  7 gallon industrial size containers of Ketchup. I quickly grab one and throw it at Gigantor’s head.

Direct hit! Gigantor is roaring in pain- blinded by the impromptu Thousand Island dressing that covers his eyes he lashes out in pain, smashing blindly into frightened shoppers and shelves he lumbers back and forth. Memories of past battles come back to me and I hear my father’s voice whisper in my ear, “finish him.” Dad is right, I can’t let this beast suffer like this- but the question is how to best end it. Fortunately there is a man who must own a convenience store or have a digestive system that is far worse than my own.

He has four packs of the Kirkland brand toilet paper. That works out to be a total of 96 rolls to extra soft, two-ply paper. I tear open a bag, grab three rolls and start firing them at Gigantor’s head. I am confident that these will work. This might be TMI, but upon those occasions where that bathroom experience seems never ending this paper always gets the job done.

Three rolls to the head have Gigantor staggering back and forth but he isn’t quite down yet. My son yells Heinz 57 and I smile. Back in the day that was the play the coach called for me. It was an option where I would run straight up the middle behind the fullback or alternatively dump it off to halfback who would throw it to an open receiver. I tuck three rolls under my left arm, drop my shoulder and run straight up the middle smack into Gigantor. My momentum takes the two of us straight into a pallet full of Whiskey and then the world goes dark.

Sometime later I open my eyes and find my kids staring at me. My daughter says that I smell funny. My son tells me that I did pretty good but that I should have dumped off the ball. I am not sure what to make of any of this. I have one hell of a headache and I smell like cheap aftershave. But I am not worried, upset or concerned because I wear the broad shoulders of fatherhood.

16: Moments- Our Lives Are Made Up of These

What Does Your Blog Say About You?