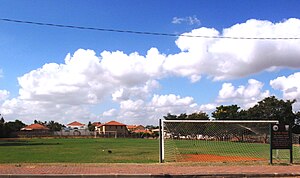 Life lessons learned on the soccer field is the sort of sterile headline that I tend to hate but I can’t think of anything better to describe this past weekend. Let me set the scene for you.

My son’s team was scheduled to hit the field at 7:30 am on Saturday. Due to several games having been rained out this season the playoffs and championships were set up to be played on one day.Â Normally they might do the playoffs one week and then follow up with the championships the next but that couldn’t be arranged this time around.

Saturday morning I walked him to the field and we talked about what to expect. He told me that he was nervous and that the boys thought that they would win the first but that the second didn’t seem likely. I told him to take it one game at a time and remember that anything can happen. My answer wasn’t complete bullshit. I believe what I said. I have experienced it personally and seen it happen at multiple levels but I can’t say that I really expected to see what I saw.

The boys came out flat during their first game and didn’t play well at all. With two minutes left in the fourth quarter they were down 3-1 and it looked like the season was about to end. Anxious parents on the sideline shouted encouraging words and pushed them to keep fighting. They didn’t have to win to make us proud but if they were going to lose we wanted them to go out on a high note.

But sports are filled with moments and this was when lady luck waved her wand. We scored…twice. Â With the season on the line we somehow tied it up and forced overtime. Apparently our boys like drama because at the end of the first overtime the score remained tied and we went into the second overtime and came out the other side still tied.

The rules dictate that you can’t go into a third overtime so they moved into Penalty kicks and both sides went through the lineups and then we managed to pull it out.

I can’t describe how much pleasure I got out of watching the look on their faces when we tied it up and then again when we won. My son’s eyes sparkled and his face was glowing. I told him how proud I was and then we walked home to rest for 40 minutes because we had another game. Resting time came and went and then boys played another team right into two overtimes but this time managed to pull out a victory without resorting to penalty kicks.

That gave us another hour of rest and then we ran back for the championship game but that fickle bitch named Â Lady Luck decided to bestow her charms upon another. The boys were gassed and they just didn’t have it. But there is no shame in second place and the smiles upon their faces when they received their medals was like an early Chanukah gift.

What Did They Learn

One of the things that I love best about blogging is that it provides a chronicle of the lives of my children. That is really why I provided that recap of the games. It is for me so that I remember the day.

But for you who want to know what they learned I share the following. I say that they learned that sometimes being part of a team demonstrates that you can be part of something bigger and greater than you as an individual. They learned that there is truth and meaning in saying “don’t give up” and that adversity doesn’t mean failure.

They learned that we have more control over our own destinies than some people give credit for. History can be changed. A team that you beat you once isn’t given an automatic win the next time you see them.

And for one moment in time these 11 and 12 year-old boys tasted something rare and sweet. It really was a beautiful thing to watch.