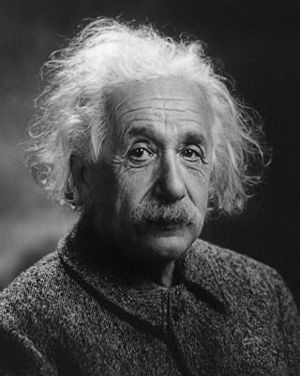 I want to thank my fellow member of the tribe, Albert Einstein for furnishing me with a quote that I used to devastate school teachers and assorted adults. The younger and far more obnoxious version of myself used to wield that quote like a cudgel.

Someone would suggest that we study/learn/do something and I would ask why. There was glee in my eyes and a lilt to my voice because I just knew that the fly was about to get caught in my web. If they couldn’t tell me in simple terms why something was I would tell them that Einstein disapproved.

There isn’t any need to share the outcome of those conversations other than to say that some people promised me that one dayÂ  I would have children who were just like me and they were right.

When I ask the dark haired beauty why she wants one she smiles sweetly, takes my hand in hers and says that she wants to send me love letters. I smile and tell her that I like hand written notes better. She smiles again and says that if I give in I can take her to her high school prom.

I smile back and tell her that she will be really unhappy if I am her prom date. She hugs me tight and says, “daddy, I love you! I won’t ever be upset if you are my date.” I look down at her and tell her that I am going to blog about that promise later so that is recorded for posterity.

When she asks what posterity is I laugh and tell her that is the thing that one day will make her say that “dad was right.” She doesn’t understand and in this case I feel no need to try to explain why I said it. That is good for everyone including the ghost of Einstein who can go haunt the Shmata Queen for a while. They can have fun doing higher math together.

Parents- Be Their Father/Mother

Sometimes these conversations with my kids make me crazy because some of my fellow parents are idiots. Some of you haven’t figured out that children need structure and boundaries. You try to be the cool dad/mom by never saying no and instead you raise a monster who comes to my house and is shocked when I set limits.

It is ok with me because when it comes to my children I don’t think twice about setting boundaries. My children know that their father loves to spend time with them. They know that in many ways I am just a big kid but they also know that I have lines that cannot be crossed.

One look is usually all it takes for them to see that they are dancing around that place they don’t want to be. I don’t have to spank them or hit them to make them toe the line. That is because I set boundaries from the start. BTW, I am not saying that spanking is good or bad. Both of my kids have been spanked, probably a total of twice in their lives.

That last line ought to be good for a few letters from readers who will lecture me about my “brutality.” For good measure let me say that I am pro circumcision. My son was clipped and so was I. And if you really wanted to know why I could explain it in simple detail.

But let’s step back from that and talk about whether my circumcision hurt me. I don’t remember a thing but I can tell you that everything has been functional down below for years. I’d offer letters of recommendation from past ‘guests’ but that would be considered bad form and frankly this post isn’t about that.

It is not always a bad thing. Sometimes you have nothing but your judgment and common sense to rely upon. My daughter doesn’t need to be on Facebook and not because certain friends of mine recently posted 25 year old pictures of us at a fraternity party where we may not have been sober. Oh hell, I remember that night and the next morning which is a feat that ought to be recorded in the Guiness Book of World Records.

I said no because there is no compelling reason to give my children another task to complete on the computer. They will spend more than enough time on it for school. Life will push them there and they will spend ungodly amounts of time on social media platforms except they won’t start as a grown up who recognizes that what we write and say can live forever.

They’ll get on there and make mistakes that could follow them around from school to school. And though I’ll do my best to monitor and guide them I can’t always be around. So it won’t hurt to keep them away for a bit longer and it won’t hurt to get them to run around and exercise like we did when we were kids.

My children don’t need to be on Facebook right now and I am good with that.