Here is a quick update on the War in Gaza.

Some videos that are worth watching:

Aussie Dave and The Muqata continue live-blogging the war. The IDF Blog has a map that outlines how an entire neighborhood was rigged for war.

Doug Ross, It is the Zionist’s Fault.

Comments From Left field has Context Matters. I know, not fair to say that reading it is like a trip to the Twilight Zone.

Solomonia has What the Fight’s About and The BS War.

Don’t forget to check out Martin Kramer: Richard N. Haass and Hamas, Rachel Marsden: The Biggest Lies About the Israeli-Palestinian Conflict and Stephanie Gutmann: Israel in the Balance, Finally, some good news on the portrayal of Israel in the media.

American Powerblog has Newshoggers and the Neo-Totalitarian Left. Bookworm blogged A Swiftian view of the death of Palestinian children.

From No Quarter we have Liberal Anti-Semitism.

This marks the end of the round up.

Here is some very disturbing footage from two dueling rallies in Los Angeles. At around 4:38 in the video several of the Pro-Hamas protesters chant things like “Long Live Hitler” and “Jews in Ovens.” It is not unlike what happened at a number of other rallies around the country and the world.

We had two correspondents this rally that verify that the men highlighted in the video were not alone in these disgusting chants. You can disagree with the war. You can list all of the reasons and allege that there is a humanitarian crisis because of the war. But if in the process you gleefully cite the Holocaust and suggest that it was a good thing you lose all credibility.

Nice job scumbags. I hope that you’re proud of yourself.

A quick selection of posts from around the blogopshere. 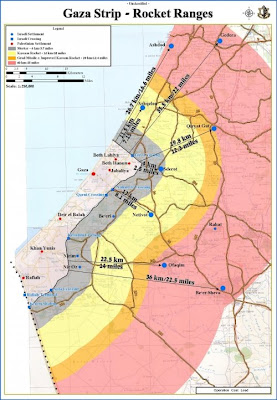 Seraphic Secret covers Unforseen Sanity: Cease Fire Rejected. It includes a special section on women’s shoes, which as my long time readers know is a mystery. That is, why do women need more than three pairs. But I digress.

From Daled Amos Is Obama Planning On Talking To Hamas? and The Cynical Approach: Gaza Conflict Is Meant To Distract World From Iran.

Lisa Goldman has Haniyeh and His Israeli Sisters and an article about media coverage in Israel.

From Shinkwrapped we have An Endless War? and Gaza and the Palestinian Hostile-Dependent Adolescent.

At The Augean Stables Arab â€œmoderates,â€ demopathy, and the incomprehension of media moralism.

From the Elder The advantages of craziness and Hamas shoots mortars at aid convoys, no one cares.

Solomonia has The Last Angry Mensch (A Boston Supports Israel…Rally?)

Soccer Dad points out the benefits and value of having blogger coverage.

This concludes the round up. Stay tuned for more updates.

Welcome to the War in Gaza Update #12. It is part of the continuing series of news and information about the War In Gaza.

And now onto the blogosphere:

The IDF blog has all sorts of interesting information. Click here for pictures of tunnels that were dug for the purpose of kidnapping soldiers. This link provides a brief summary of things that were accomplished including information humanitarian aid trucks that rolled into Gaza, discovery of more tunnels, weaponry and the neutralization of some terrorists.

Seraphic Secret has updated It Can (and is) Happening Here. At Yourish W. abandons Israel again.

Treppenwitz writes about the rockets in the North. At the Jawa you’ll be shocked when you see Hamas Kills Innocent Palestinians (Rare Video).

I am going to keep hammering this story ‘Protestor’ Calls for Jews to ‘Go Back to the Oven’. Emmanuel Lopez is a ignorant fool who encourages the worst sort of behavior. The inherent hypocrisy he exhibits is shameful.

It is about time we get to read A Gaza Chronology that covers more than the past two weeks.

LGF covered A Staged Scene in a Gaza Hospital? – Update: CNN Yanks Video and Video: Hamas In Their Own Voices.

Yglesias covered Carter on Gaza. It is pretty much a festival of ignorance in the comments. Commentary reflected on Carter.

The Moderate Voice shared Gaza: Pride of the Arabs – Le Quotidien dâ€™Oran of Algeria. Mother in Israel shared Updates and list of injured soldiers and civilians.

From Joshuapundit we have Hamas Torpedoes Egyptian Ceasefire Attempt. At No Quarter you can read BREAKING NEWSâ€“UN Security Council Acts on Gaza.

The Elder Shared More on the jihadists’ joy at dead civilians and PalArab press roundup Jan 8 2009.

In the American Thinker you can read Human shields: Where’s the outrage?

Shiloh Musings has the International List of Rallies for Israel- Friday Jan. 9 And After and Traveling the Red Zone, Part D (Habad Shelter, Nitzan).

Lady Light asks What can We do When Israel is at War. At Global Voices you can read Egypt: Bloggers on the Fence.

Chabad has Editorial: Where Wills Collide, Israel Survives. Pat Buchanan’s big mouth is at it again.

This concludes our round up. Stay tuned for the next edition.

Welcome to the War in Gaza Update #12. It is part of the continuing series of news and information about the War In Gaza.

Within the MSM we have the following selections:

Israellycool and The Muqata are still liveblogging the war. The IDF Spokesperson blog continues to provide updates as well.

At Yourish I recommend you read Hamas targets schools, world is blind, deaf, and dumb on topic, He writes what I think and How soon they forget?

Over at Soccer Dad Aint nick’s boomerang and The Watcher’s Council Nominations.

At Hot Air you can read Palestinians try opening a second front. At The Week spend a moment looking at Why Democrats recoil from Gaza.

Crittenden shared Gaza, Trash Heap of Moral Authority, including comments about Jimmy Carter. Don Surber has remarks about Carter’s comments at Jimmy the joke. So does A Blog For All: Foolish Evil Anti-Semite Rant of the Day: Jimmy Carter.

While you are there go read Operation Cast Lead: Day 13. Here is one more from Soccer Dad about Jimma.

Seraphic Secret wrote It Can (and is) Happening Here. Irshad Manaji writes Palestinian leader: â€œFatah and Hamas come from the same rootâ€.

Mother in Israel submitted Updates and list of injured soldiers and civilians. At Shiloh Musings No Time For Truce–Israel Attacked From Lebanon!

My Right Word shared Dr. Chesner on “War and the Parental Instinct to Protect” and Here’s A Great Support Group Initiative.

This concludes the round up. We’ll try to update this later.

Welcome to the latest round up of news and information about the War in Gaza. You’ll find that this is a useful tool for learning what is going on from a variety of sources and perspectives.

Within the last week thousands upon thousands of visitors have spent time reviewing the round up.

Let’s take a look at the MSM and see what they have for us today:

And now on to the blogosphere.

Israellycool and The Muqata are still liveblogging the war. Two comments about the men behind these blogs. Aussie Dave is a very fine fellow, but he has this misconception that Aussie Football is somehow superior to American.

Jameel is another fine fellow. Little known fact outside of the Jewish/Israeli blogosphere, he makes the most incredible waffles. In fact he has plans to start his own line of Israeli Waffle Houses. More on this later.

The IDF blog continues to provide critical information and video footage. Here is a link to a blog post about IEDs.

The video below shows a surgical strike in which various terror targets are struck.

Mere Rhetoric British Muslims Doing Their Best To Cleanse Britain Of Jews and I Get (Often Inarticulate) Mail.

Read Seraphic Secret’s The Horrors That Do Not Count. A post that points out the hypocrisy and moral ambiguity of those who hold Israel to the fire but fail to speak out against real humanitarian crises around the world.

Crittenden in Weep No More discusses the crazy rantings of a cleric and in a post called Martydom Opportunities Mulled he spells out flawed arguments in a Thomas Friedman column and more.

Snapped Shot shared FINALLY! It is a post about how the media is finally covering the hate filled Pro-Hamas rallies.

Baila says It’s my first war and I’ll cry if I want to. At Writes Like She Talks Jill asks Is blaming â€œthe 60 years of occupationâ€ a euphimism for â€œone-state solutionâ€?

Roger Simon writes in his post about the drawbacks of relying solely upon traditional media and why the blogosphere is important in The MSM, Gaza and Pajamas TV.

Let’s put the White Phosphorus discussion to bed. Here is a debate about photos and their authenticity.

Take a look at The World Supports Hamas? Of Course, They Do!

More on this from the Syria News Wire The one state solution. It is skewed and I’d ask that people consider that when reading it. But as I said it is important to see what the other side says, even when they are spinning a tale.

Shiloh Musings shared Traveling the Red Zone (Nitzan). Freedom’s Cost Down, but Not Out!, Kuwaiti Editor Identifies the Real Murderers in Gaza and Enough’s Enough!

Zionist Conspiracy says to say no to a ceasefire. Boker Tov Boulder asks With “friends” like Condoleezza Rice, who needs Hamas?

From Yid with Lid we have Video Of Hamas Using Gaza UN School To Fire Mortars and HUMAN SHIELDS WHERE’S THE OUTRAGE ?

At DovBear we have “Land for Peace”. Ruti shared Daddy, what did Mommy do while you were fighting the war?” and “What can I do? I can’t just sit here…”

This concludes our round up. More to come later.