This is the sort of post that I struggle to write. I struggle because I have a story to tell and I want to convey the message in a particular way but I am not quite sure how to do it. It is a story of life and death, of the power and pain of love.

It is moments like this where I wish that I could write music because such a tale deserves an appropriate soundtrack. A full orchestra that could impart the highs and lows of this story because I am not quite sure that I can do it justice. Since that is just not possible I am going to do my best to fumble my way through this. All I can do try my best to catch the Silver man, so here we go.

Just a few short hours ago I was at a holiday dinner with my family. The table was covered in with a beautiful linen table cloth and adorned with china and silver. Several assortments of flowers were spread out throughout the table. And of course there were lots of guests surrounding the table.

Now I could tell you about the peals of laughter emanating from children like silver bells or I could share the sounds of my grandparents and relatives discussing the election and the rabbi’s sermon. It wouldn’t be hard because those are probably things that you can relate to.

But then I might miss out on sharing a tale of two widowers. Two men who lost their wives roughly a year ago. Two men who sat at the table and enjoyed the meal, but whose eyes and words revealed the depth of the pain of loss.

But I’ll do my best to teach my children to seek the positive side of all this. If the loss doesn’t hurt than there is a problem. I have often thought that to a certain extent you can expect the loss to be as painful as the love was joyful.

At separate moments they both made a point of telling me to make sure that I truly live my life because the person I love most could unexpectedly be taken from me. It is a theft like no other. I can’t say that I truly understand what they are going through, but I can say that I am convinced that the hardest pain to deal with is mental pain.

You can always find a way to get around the physical pain, but mental pain is a harder nut to crack. How do you turn off your memory. How do you forget and would you really want to.

So I find myself lost in thought about the words that they shared with me and how to apply them to my life. I don’t want to wake up and say that I failed to live my dreams because I failed to try. It is one thing to have tried and failed and another to have never done so.

I can find a way to live with the failure of having tried and been unsuccessful, but I don’t think that I can live with never having tried. Someday is a great way to put off the future, but someday doesn’t always come.

And so I find myself pondering the new year with similar thoughts and questions to those I had last year. If I have any sort of resolution it is to make a greater effort to live my dreams and to do the things that I need to do to have a happier and more meaningful life because you really don’t know when it might all come crashing down upon you.

So I decided to try using Wordle to provide a graphic rundown of some of the posts from this blog. I have done my best to provide links to the stories above the image. 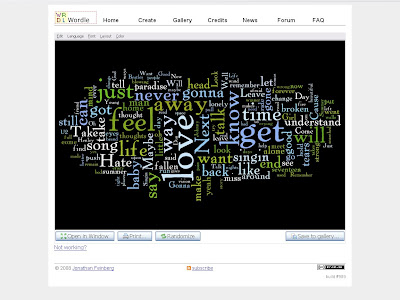 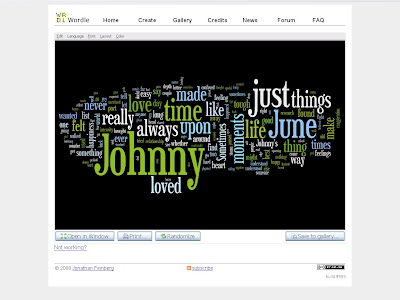 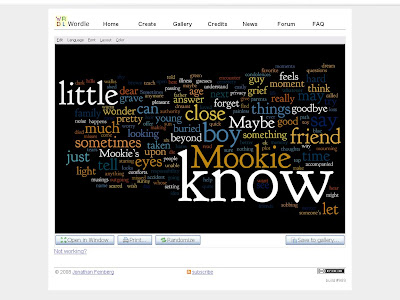 The Bearer of Bad Tidings- One Less Set of Footsteps 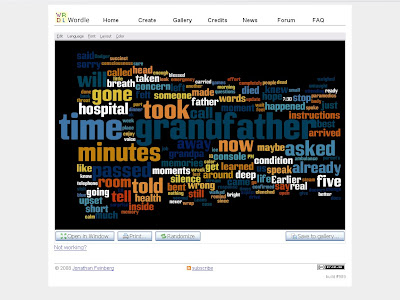