Generations- They Are All Gone Now

It is Thursday night and I am finally back on the computer. We’re less than 24 hours away from the family dinner where we get to tell pharaoh to stick it. We built those pyramids and we are sending a bill for over due wages.

That is a less than clever way to say that Pesach (Passover) starts tomorrow night. It will the very first seder without grandparents. Scratch that, my children will have their grandparents but I won’t have any of mine. They are finally all gone now, every last one of them have moved on to the next step.

And with that all of the generations officially move up a notch.

I like that lonely tree. It fits my mood. It reminds me a bit of one of the cemeteries I sometimes go to visit my grandparents. It is quiet but there is something warm and inviting about it.

I don’t go very often but when I do I usually talk to them. I tell them about my kids and fill them in on what I am doing. I talk about my plans for the future and ask them for their input. Sometimes I hear things but I can’t tell you if that is them responding or just my active imagination.

My grandparents weren’t religious people but they knew who they were. Some of this is because my great grandparents felt that it was important to be Americans so when they came over they let go of some of the “old traditions” but not completely.

Holidays never disappeared nor did all of the family change. The rabbinic line in my house Â still exists and it is not a secret that I have thought about going down that path a time or two.

I remember a dream I had once upon a time in which I felt like I was part of a Chagall painting. It wasn’t quite like the photo below, but it was somewhat similar. 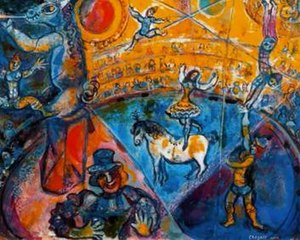 But then again it was sort of similar to this video in a way too:

My biggest cheerleaders are all gone now. That is not to say that my parents aren’t supportive because they certainly are. My father would have run the race with me just as I would for my own children, but grandparents are different. Not better, just different and it is so very strange to me to think that tomorrow night I won’t see any of them.

It doesn’t mean that I won’t feel their presence because clearly I do. I still hear their voices and I remember so much but there is a piece of me that wishes it didn’t have to be this way. When I watch that video I think of how important it is to let our children finish the race. We may have to point them in the right direction or give them some support, but they need to finish on their own.

But that doesn’t mean that I don’t wish that they were here to hear my stories about my own kids. They don’t get to see the dark haired beauty sing or listen to her talk about the day she was born. “I came out of mommy covered in blood and mommy’s guts!”

No one told her that, she came up with it on her own. That girl of mine is a clown at times. She puts her forehead against mine and says she is reading my mind and that I have “juicy thoughts.” She torments her brother with glee and then when he leaves the room tells me that she loves him.

And her brother is such a character in his own way. He is getting so damn big. We talk about everything. He tells me that he thinks that it is possible that maybe one day girls won’t be so “stupid” and that maybe he might consider dating.

I laugh and then he asks me to sit on the couch and watch a movie with him. The big kid slides back against me and tucks himself inside my arm the same way he has done his entire life. I smile and wonder how much longer he’ll be willing to do it.

My grandparents used to read all of my articles but they never read my blog. I never shared it with them. Sometimes I am sorry that I didn’t because they would have loved reading it. My grandfathers would have laughed pretty hard at some of these stories and my grandmothers would have asked me to tell them who I am talking about. They wouldn’t have believed that there are several women here and not just one but if I said no they would have been ok with that.

But they are gone now and I can’t fix or change any of that. All I can do is what I have done. They live on in my words here and it does more than help me carry them in my heart. One day the kids will be able to read this and learn a bit more about them.

It is time to go now. Sleep beckons and I must attend to it. But before I go I promised to provide some links:

More posts on WritingÂ and grandparents. Mind you those aren’t individual links, but they will have to do for now. Coming up soon a new post on how to write the “about me” page of our blogs and 18,873 tips I never shared with you.